Or Lemon and coriander potato balls to you and me.  I have reproduced this recipe from Prashad - Indian Vegetarian Cooking by Kaushy Patel.  I previously reviewed this book so you'll know what a big fan I am of what I consider to be one of the top 5 cookery books in my vast collection.

The notes in the book call this a simple starter and in the preparation and cooking it is, but the flavour of these little balls is anything but.  Bursting with flavour you get warming heat from the chillies, sweet hits from the sultanas and coconut which is balanced up with the citrus zing of lemon and coriander.  Bataka vada has been sold at Prashad from the very first day they opened a small deli in 1992 and once you try them you'll know why they remain so popular.  I have made these several times and adjusted the chilli content to suit my guests.  when making them milder I serve with a tomato and chilli dip and a yoghurt based one when making them more chilli hot.  The recipe has been copied exactly as it was printed with kind permission of Prashad.

Recipe notes emphasis the importance of boiling the potatoes in the skin so they don't absorb too much water. 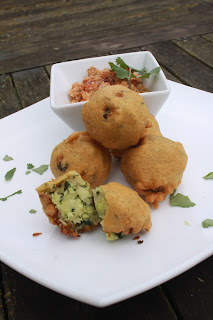 Sunflower oil for your hands and frying

Crush the chillies and garlic together with a pinch of salt using a pestle and mortar (or a blender) to make a fine paste.

Put the batter ingredients into a medium sized bowl, add 225ml of cold water, and stir until the mixture comes together - it should be thickly runny, with a similar texture to treacle.

Boil the potatoes in their skins for 40 minutes or so, until a knife tip will slide in easily, then peel and mash.  Put the mashed potato in a large bowl with the masala paste and the rest of the filling ingredients and combine, taking care not to overwork the potatoes.  Lightly oil your hands and roll this dryish mixture into 16 balls, each about 3cms in diameter.

Heat the frying oil - about 20cms deep - in a large pan over a high heat (or a deep fat fryer, if you have one).  Test the temperature by sprinkling a few drops of batter into the oil - when it is hot enough it will float to the surface.  reduce the heat to medium.

Drop 5 potato balls into the batter mixture and carefully roll them around to make sure they are fully coated. Gently lower them into the oil an fry for about 3 minutes, moving them around with a wooden spoon to stop them sticking to the pan.  When the batter is crisp and golden, remove from the oil and leave them to rest on kitchen paper, while you batter and fry the remaining bataka vada in batches.

Serve while still warm with a relish or dip of choice.

Wotnomeat
Fairstead, Essex, United Kingdom
I became vegetarian in 1979 as a bit of a dare to impress a girl. I live in Fairstead Essex with my four English Springer Spaniels Mr Larsson, Nellie, Kalle Blomkvist and Cupcake. I enjoy making food from all over the world, but I guess I always return to the cuisines that helped me survive as a naive teenager - Indian and Italian, who couldn't survive on curry and pizza. this year's big project is to turn part of my garden into an orchard and vegetable patch